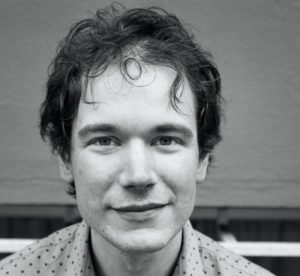 Philip is co-creator/writer of the fiction podcast series The Amelia Project (finalist at The British Podcast Awards 2019) and joint artistic director of Imploding Fictions. He has directed plays at Battersea Arts Centre, Southwark Playhouse and The Junction and worked as dramaturg, assistant director and translator at numerous theatres in London including The National Theatre, The Almeida and The Royal Court. He currently lives in Paris where he is producing Season 3 of The Amelia Project and writing a new show called A Magician’s Death (semi finalist at Austin Film Festival 2018). Philip is represented by Micheline Steinberg Associates in London.

The Amelia Project is a fiction podcast series about an underground agency that offers a very special service: faking its clients’ deaths, then letting them reappear with a brand new identity. The agency is run by an enigmatic cocoa crazed gentleman who submits clients to a rigorous vetting interview. He only takes on clients whose cases tickle his imagination…

It’s an idea that had been kicking around in my head for a long time, though initially not as a podcast. In fact, until a few years ago, I’d never even discovered the podcast app on my phone and thought audio drama consisted of stuffy Radio Four plays and the Archers.

Then I discovered Welcome to Night Vale and it was the gateway drug! All of a sudden my commute on the crowded Paris metro became something I actually looked forward to. I could  pop in my earbuds, close my eyes and escape to Antartica (The White Vault), outer space (Girl in Space), the island of Piffling (Wooden Overcoats) or the the magical kingdom of Foon (Hello from the Magic Tavern). But audio fiction changed more than just my commute…

Three years ago I was in a creative rut. I’d spent several years scraping together a living in the London theatre scene, then decided to pack it all in and follow my girlfriend to France. I spent the next year zigzagging around Paris as a freelance English tutor. In between brushing up on modals and subjunctives, I drank chocolat chaud at Les Deux Magots and made notes for jokes, stories and characters. I was desperate to return to some form of storytelling. But I had no creative network in France.

Back in London, my creative ally had been Øystein Brager. Our productions included a deconstructed version of Hamlet set in a sandpit and a show about two drunk pigeons in a pub. Øystein had also left London and was now pursuing a directing career in Norway. We wanted to collaborate again, but being based in different countries made working on a theatre project very difficult. Podcasting was the perfect solution! I told Øystein my idea for a death faking agency, he came up with the title “The Amelia Project” and said “what if one of their clients was an AI?” And we were off, texting and emailing each other several times a day, coming up with clients and their reasons for needing to disappear. I’ve always loved the process of developing ideas in collaboration. Half baked ideas I probably would have dismissed by myself are taken up and developed by Øystein and vice versa. We throw ideas back and forth, trying to surprise each other or make each other laugh, until eventually something sticks. When writing drafts it also helps me immensely to be writing for someone.

Once we’d written the scripts, we needed to assemble a team, and once again, podcasting allowed us to think internationally. Our two lead actors are Alan Burgon (The Interviewer) and Julia Thorne (Alvina), both based in Vienna. We chose Alan and Julia not just because they’re wonderful actors, but because we felt they would be great collaborative partners. Julia was the first person to read and critique the scripts and also helped cast the first season. Alan has directed episodes and is great at making guest actors feel comfortable. In many ways Julia and Alan have become the bedrock of the show.

Getting the team physically together isn’t easy, but to kick things off, we felt it was important to do so. Øystein and I travelled to Vienna for a weekend and we all spent Saturday in Julia’s flat, eating pizza, working on the characters and figuring out the show’s performance style. On Sunday we recorded the first two episodes. These two days provided a blueprint of sorts and meant that for future episodes, even if we weren’t in the same country, we were all on the same page. Øystein directed bits in Oslo, I directed bits in London and Alan directed the Vienna sessions. 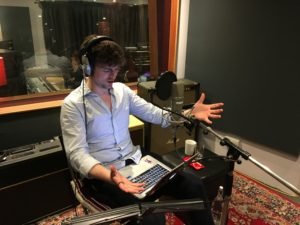 Alan Burgon (The Interviewer) in the studio.

We toyed with the idea of recording actors remotely but decided that, as much as possible, we wanted to have our actors together. That’s partly because of the the show’s fast dialogue and partly because our theatre backgrounds meant we placed a high value on live interaction. A common maxim in theatre is acting is reacting. By recording the actors in the same room we get not just their lines, but their reactions (breaths, grunts, chuckles, even body movements when someone else is speaking). The only major part in the first season which we recorded remotely was SIIRI, an Artificial Intelligence. After the first edit, we felt the episode lacked spark and fluidity. We asked Alan to listen to SIIRI’s dialogue on headphones and recorded his reactions as he listened. Mixing his reactions under SIIRI’s lines really brought the episode to life!

Sound and graphic design are areas in which working remotely is much easier. Our sound designer is Fredrik Baden and our graphic designer is Anders Pedersen. As with Alan and Julia, they are core creative partners who bring their own personality and vision to the show. We occasionally Skype, but mostly we send each other a barrage of messages. WhatsApp and Messenger are great for brainstorming, but it can be a nightmare to scroll back and find important information. After too many notes getting lost in scroll limbo, we now feed all tasks into the project management software Asana. This allows everyone to have a clear overview of tasks and deadlines and tick things off once they’re done. It’s made our lives so much easier!

Often the boundaries between story ideas, visual ideas and audio ideas blur… One example is when Anders designed the show’s logo which consists of a phoenix rising from a cup of cocoa, circled by morse code. Freddy then took the morse code and integrated it into the theme music! 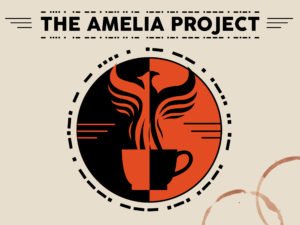 Another example: The episode MELISSA MENKEN follows a woman who can travel short distances in time. She’s constantly jumping a few minutes back to adjust her actions, then skipping forward to see how it’s affected things. I wrote the episode with a jumbled chronology, not signalling the jumps in time as I wanted the listener to feel the same disorientation as the protagonist. Listening to the first edit however, it quickly became clear that the effect was too confusing. Freddy came up with the solution of a subtle sound each time the character shifts in time, and adding this totally transformed the episode.

Like theatre, fiction podcasting is a collaborative medium, in fact, even more so! The cast and crew for a theatre show are together for a few weeks or months, but for a series, you want a team that will stick together for the long haul! Finding creative partners you trust, whose company you enjoy, who you can have frank exchanges with and learn from, is key to creating a longterm artistic project.

Collaboration is the The Amelia Project’s secret ingredient. (Well, that and cocoa).

To listen to The Amelia Project for free, click here to get started.